S Kaeth is a dreamer and always has been, as well as a mega geek of various geekeries. 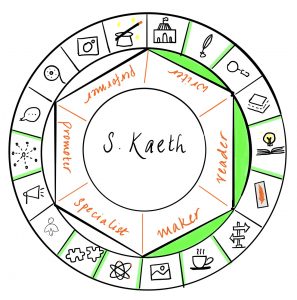 She was raised in the gorgeous Driftless area of the Midwest United States on a steady diet of Tolkien, C.S. Lewis, mythology, legends of King Arthur, superheroes, and Doctor Who. As a child, she told stories constantly, to family, to friends, and she wrote some of the worst fan fiction and short stories that no one will ever get to see. Seriously, they were bad.

As S got older, she was inspired a great deal by Andre Norton’s Janus novels, the Foundation series, the Ender’s Game series, Wheel of Time, Ursula K LeGuin, and books like Ringworld. She spent her free time with her best friend or her imagination, walking and thinking and making up worlds. They created their very own roleplaying system with its own class system and lore and mechanics. In fact, it actually creates the basic underpinnings of the “magic system” in her novels today, though she’s polished and improved those early brainstormings.

She’s an avid reader, and finds that her optimal ratio for reading to writing is about 2-3 parts reading to 1 part writing. S has been serious about her writing for about ten years, practicing and writing truly awful novels in order to hone her craft and keep herself sane. She has to write and tell stories; it’s an integral part of who she is. Writing helps her to make sense of the world around her and deal with life in general. Creative expression in some way helps her to get through the dark times and celebrate the bright times. S has always been, and always will be, a storyteller.

I’m super excited about the stories I have planned to tell, and hope you will enjoy them!

S is a Writer In Motion!