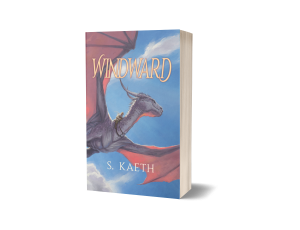 Dragonbonded Palon and her partner, the dragon Windward, are renowned for their flying skill among the dragons and dragonbondeds who make up their family. Palon’s days are filled with everything she loves, especially riding the wind. Even being tasked with teaching their way of life to Tebah, a newly bonded teenager, can’t bring her down too much.

But when treasures from the dragons’ hordes are found in Palon’s collection, her idyllic life comes crashing down. Framed, she battles to find the truth, to prove her innocence, while her every move is cast as further evidence against her. As if that wasn’t enough, her teenage charge’s increasingly dangerous behavior puts them both at risk. Tebah’s suspicion, homesickness, and defiance would be frustrating enough even if Palon wasn’t in the spotlight, with a rival smearing her name at every turn. Dragon tempers shorten, and challenges and disputes shake the ground.

Windward and Palon must find a way to clear her name while also keeping a teenager who hates her and everything about dragon life safe, before their community turns completely against them or vigilante justice succeeds.

Content warnings can be found at the bottom of Windward’s main page. 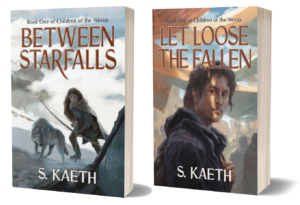 Children of the Nexus

When a little boy gets lost in the forbidden mountains, his desperate mother, her brother, and her two best friends break the law every Rinaryn is taught from the time they can walk: never, for any reason, leave the path.

The traditions of the Elders have peacefully ruled the agrarian Rinaryns for centuries, but when her son Eian goes missing, normally mild-mannered Kaemada defies the sacred law to search for him in the forbidden mountains. Despite knowing there is little hope for redemption upon their return, her brother and two best friends join the search, believing their sacrifice will be worth it to save the boy.

But when the search party is captured by the legendary Kamalti who dwell under the mountains, they discover that the Kamalti have been sending lost travelers to an ancient prison city. Due to a generations-old translation error, Eian has been left to fend for himself in a city full of the worst criminals. In the face of Kamalti prejudices, the Rinaryns must reach an understanding with their captors to find Eian and make their escape. If they can’t get the Kamalti to see them as peers, countless more lives will be needlessly destroyed.

Four Rinaryns will determine how the future unfolds for both races: the hero running from glory, the peacemaker trained for battle, the priestess berserker, and the tall dwarf with the smart mouth.

Content warnings can be found at the bottom of Between Starfalls’s main page.

The priestess searches for her faith.

The fire-wielder wrestles with her past.

The psion dreams of peace.

And the hero is torn between his heart and his duty.

While grief scatters the four protectors to the winds, outside forces write history according to their own whims. The fate of the Rinaryns lies twined with that of the boy, Eian, caught in a tug of war the heroes are unaware of.

But the evidence lies waiting for Taunos and the others to see, if only they can move past their betrayal.

Content warnings can be found at the bottom of Let Loose the Fallen’s main page. 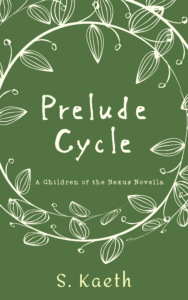 Prelude Cycle: A Children of the Nexus novella

This novella is arranged as a series of seasons with one short story vignette from each of the four main point of views. These stories are set approximately three years before Between Starfalls begins.

Taunos attempts to get into the library of Far Dahutad.
Takiyah balances her love of learning with the judgements of her community.
Kaemada struggles mind to mind.
Ra’ael faces challenges on her path to becoming a priestess.

If you’re looking to dip your toe in the Children of the Nexus universe and get to know the characters briefly, this is the book for you!

Content warnings can be found at the bottom of Prelude Cycle’s page.

One Reply to “Read”